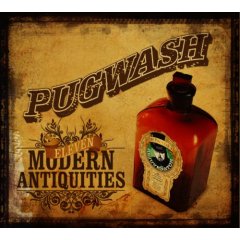 Although many iconic power pop bands are influential, very few bands can be called a standard barer for a genre. After the demise of XTC in 2002, other bands would keep alive the style and vision of Andy Partridge and Colin Moulding, but none with the perfection of Pugwash (although The Sugarplastic come close). Pugwash's newest release ‘Eleven Modern Antiquities’ is a perfect power pop album, with a dazzling array of guest musicians, including Andy Partridge & Dave Gregory of XTC (Andy co-writes two tracks with leader Thomas Walsh), Neil Hannon of The Divine comedy, Michael Penn, Jason Falkner, The Section Quartet and Nelson Bragg of The Brian Wilson Band. The result is an amazingly awesome pop sound and best described by reviewer Alan Haber, "Walsh is a pop pundit who fuels his ideas with his deep-seated love of the pop form, whose admiration of the classic pop sound brought forth by bands like the Move and the Electric Light Orchestra and XTC knows no bounds, who lives and breathes what lies at the heart of great pop music and knows how to mix all of that up and create songs steeped in ideas that sing with melodies and harmony and the odd musical quote, and has the good sense, thank God, to share it all with the world." The songs along the album have the right amount of balance, from soft ballads to multi-harmonic mid-tempo rock. Every track works, but the highlights here are that modern single "Take Me Away" with a killer bassline that drives the melody. Other ear melting tracks are the ELO-styled ballad "Here" and the sunny perfection of "Your Friend," my favorite on the album. XTC fans: Don't even think of buying anything else until you get this album, a top ten of 2008 potential winner for sure. I prefer to call the album "Eleven Modern Miracles" it will cure whatever ails you.

My Space | The Pugwash website | Kool Kat Musik | Not Lame