THE BACKSLIDERS - serves you right 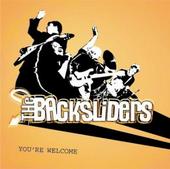 -Rock and Roll and Meandering Nonsense...

Folks who loved the first couple of Blondie albums (before the band turned into a partially digested baloney dump) will likely get a trusty kick out of The Backsliders. Recorded in Spring and Summer of 2007, You’re Welcome features pure, simple, catchy pop music played with integrity and style. The band consists of Chris Bonner, Kim Pendleton, Nolan Theis, and Taylor Young. The sounds on this album were created from a pure love of playing and unbridled enthusiasm. The band writes all of their own material...and almost every song they write sounds like a Top Ten hit. But don’t expect to hear the kind of cheesy breast milk that gets pumped out by American Idol retards. The Backsliders play real pop for real people. Plenty of cool, chunky nuggets here including "You’re Gonna Miss Me," "Typically I Don’t Mind," "Now They Know," and "Someone Has Broken." Really nice sounding pure pop with top-notch vocals. (Rating: 5+)