THE NERVES - when you find out 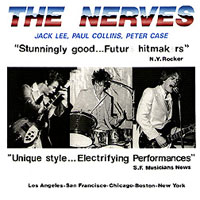 The Nerves were a mid-'70s power pop trio based in Los Angeles, California, featuring guitarist Jack Lee, bassist Peter Case, and drummer Paul Collins. All three members composed songs and sang. They managed an international tour in the U.S. and Canada, including dates with The Ramones, and performances for the troops as part of the United Services Organization. The Nerves lasted just a short time and self-released only one self-titled four-song EP in 1976, featuring the songs "Hanging on the Telephone" (Lee), "When You Find Out" (Case), "Give Me Some Time" (Lee), and "Working Too Hard" (Collins). The Nerves were managed by drummer Paul Collins, who also did most of the band's bookings and promotion. The Nerves' EP was distributed by independent Bomp! Records and officially re-released to CD and vinyl by Alive Records in 2008, followed by a second release of The Breakaways, an album of post-Nerves recordings made by Paul Collins and Peter Case prior to the formation of Collins' group The Beat.