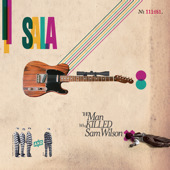 London based indie band SALA takes its name from frontman and songwriter Sala Elassir. Born in Beirut and raised in Madrid, Sala came of age in the US East Coast music scene, playing in DC and in New York before making a move to the UK where he is now based. Initially working on a studio based solo project, Sala ended up putting a band together and taking the music to where he felt most comfortable- live and on stage. The result was an upbeat, energetic and melodic sound that has led the band to become firmly established in the London circuit, and also has taken them to both Germany and Spain, where they have received wide exposure, and where they are lined up to play some important festivals this summer.