JEFF BRUCKNER - song to pay for you 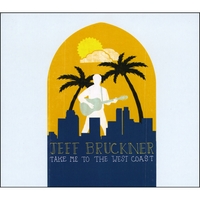 "With the help of Stephen Butler (Smash Palace) on guitar and Anthony Bezich on drums, Jeff Bruckner’s debut is a combination of Raspberries and Cheap Trick-styled power pop sure to please. The opening tracks of "Chicago" and "Not Feelin’ It," are rocking songs with meaty hooks, big enough to catch you quickly and not let you go. The more laid back tone of "Point of View" has a bit of Wilco’s early touch. The Posies-like "Murdering Man" is another standout here with Butler’s great guitar work and the playful lyrics ("Well I shot a man with spray on tan/With a shotgun/No, a rubber band"). Behind it all is Bruckner’s earnest and well thought out stories. This is an excellent power pop album and the hits keep coming with Pezband-like "Song To Pay For You" and the forceful "Quarterback Lover." Even the power ballad "Love Me Now" is a well executed like torch song, without venturing into cheesiness - a bit like Lindsey Buckingham. Even the jangle filled ending track "Envy Of All Our Friends" is a wonderful mid-tempo song that would fit well on a modern movie soundtrack. No filler here either, so the whole album worth some heavy ipod rotation too. It’ll be on mine." 8 out of 10.

"song to pay for you"